It’s not exactly ground breaking news that Chinese Seller are using eBay.co.uk & Amazon.co.uk to flood the UK with fake and counterfeits goods.

For the purpose of this case-study we have chosen just one product; the most expensive iPhone case on the market the Lunatik TIKTAK iPhone case which retails at £49.95.The counterfeit version can be purchased for as little as £5.95 on eBay. 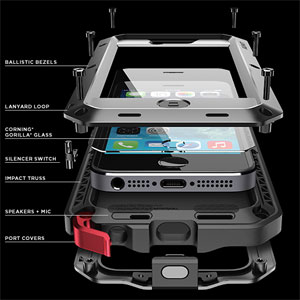 The case was launched on crowd funding website Kickstarter.com. It was designed by Scott Wilson, CEO of Lunatik and raised $680,568; one of the most successful projects launched on Kickstarter. View Lunatik TIKTAK Kickstarter Project.

Sellers are very careful not to use the brand name “Lunatik TIKTAK” when they list counterfeit Lunatik cases. They simply call it an “Aluminium Gorilla Case for iPhone”

They do, however, use official product photos stolen from the Lunatik website. When we purchased a case from persue1234, the case received was counterfeit with Lunatik branding.

Search eBay for Gorilla iPhone Case and over 4,000 items listings can be found. Most of the items are counterfeit Lunatik TIKTAK cases.

We researched the top sellers on eBay of the counterfeit Lunatik TIKTAK cases:

Chinese sellers are not only Evading Vat, they are flooding the UK with counterfeits & fakes.

These sellers have been reported many times for selling counterfeit cases. However eBay have declined to take any action and have allowed them to continue selling their counterfeits. eBay recommended we contacted the manufacturer.

It is standard practice for Chinese Sellers to steal official images from manufacture websites and use them as their own to sell fakes, counterfeits and cheap copies.

eBay will only take action against a seller if the official manufacture and IP (Intellectual Property) Owner contact them and makes a formal complaint via eBays VERO system. It is the IP owner’s responsibility to monitor all eBay listing for fake products and not eBay’s. eBay will let sellers trade counterfeit goods until it has been reported to them by the IP owner.

We contacted Lunatik who said they couldn’t cope with the problem because it is so big. They stop one seller and then another one simply pops up. The amount of money and resources they need to combat the fraud is just too much.