Our campaign was set-up by a group of UK eBay and Amazon business sellers. We have felt the full impact of the VAT evading overseas sellers who have taken over eBay & Amazon and pushed many of us out of business.

In July 2014 we sent HMRC a comprehensive report detailing the £billion Online VAT Fraud and listed hundreds of VAT Evading sellers. We had hoped that HMRC would have taken action, but they chose to ignore it for years.

We finally decided to set up this website and publish the report that HMRC had been ignoring. By that time our report included lists of thousands of overseas sellers who were committing VAT Fraud.

Thanks to Richard Allen from RAVAS – Retailers Against VAT Abuse Schemes our campaign has gained much media attention and political backing.

RAVAS has been pivotal to the success of our campaign. RAVAS is an independent pressure group of UK retailers who successfully fought to end the exploitation of the Channel Islands LVCR VAT Loophole.

HMRC started to engage with us after we attracted a lots of negative media coverage about their incompetence in tackling online VAT fraud. HMRC then spent many years introducing new policies that failed.  We had many meetings with them over this time. We told them the only way to solve the problem was to get online marketplaces to collect the VAT.

Finally on 20th November 2019, HMRC made Online Marketplaces responsible for collecting VAT.  In the first year HRMC will have collected £1.4bn in VAT from overseas sellers. We estimated that HMRC has failed to collect over £9bn in VAT since 2014.

HMRC failed to understand and underestimated the enormity of the problem at every stage.

The Office for Budget Responsibility

On 27 October 2021, the Office for Budget Responsibility set out their assessment of the fiscal impact of the new rules for overseas goods introduced from 1 January 2020, which includes the requirement for overseas businesses to register for VAT in the UK for the sale of low value imported goods. Based on outturn data for the current year it is now expected that the measure will generate £1.4 billion in 2021-22, rising steadily to £1.8 billion by 2026-27, a fivefold increase on the previous estimate.

We worked with the Public Accounts Committee providing evidence for the hearing and gave in-depth briefings on how the fraud worked. On 13 September 2017 the PAC had a public televised hearing on Tackling online VAT fraud and error inquiry with the heads of HMRC, eBay and Amazon.

We submitted several written evidence documents to the PAC which are available online.

In conjunction with the PAC hearing, we helped The National Audit Office carried out an investigation “VAT evasion by overseas online retailers” looking at the risk of VAT (Value Added Tax) evasion by overseas online retailers. The investigation focuses on HMRC’s role in administering the UK VAT system, including managing and reducing risks to the collection of tax revenue.

Our campaign has also led to:

We worked with the Panorama team for several months helping provide evidence about the Online VAT Fraud. The program “The Billion Pound VAT Scam” was televised on 27 November 2017 and was be viewed on iPlayer until 27 September 2018.

Online traders who evade VAT are forcing British companies out of business and costing the taxman more than a billion pounds a year. Reporter Richard Bilton sets up his own business to test what checks are made to stop the tax cheats exploiting the UK. 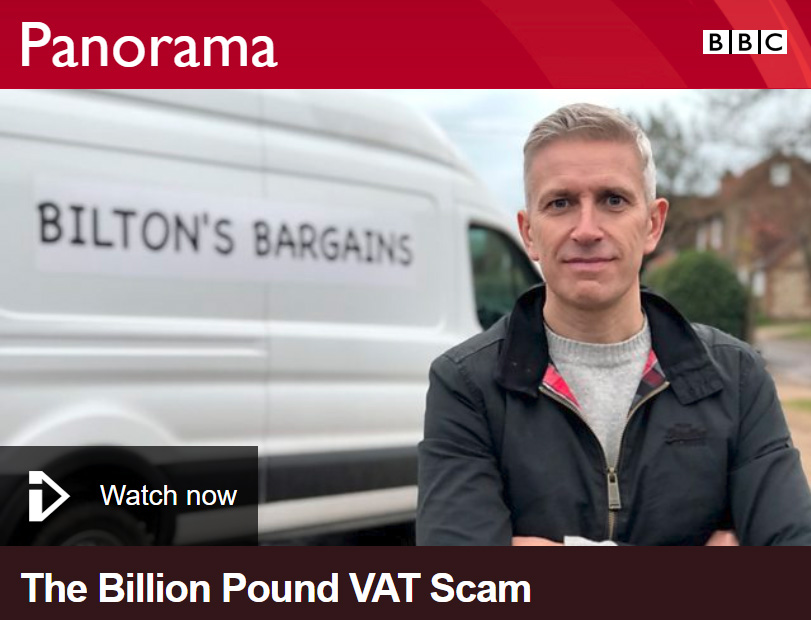 Below is some of the coverage we have gained:

Just some of the coverage:

Budget 2016 Announcement; George Osborne MP, Chancellor of the Exchequer announced a series of measures to combat on-line VAT Fraud in the March 2106 Budget (starts at 13:01:35). These measures include: